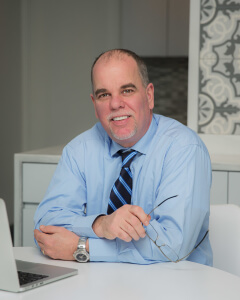 Born and raised in New York, Edward Varricchio (“Eddie”, as he’s commonly referred to) began his career as an electrician working in various co-op buildings throughout the city. Always being a hands-on individual, Eddie quickly and seamlessly expanded into other construction services. Before too long, the demand for his services gave rise to more complex opportunities in the form of partial to full scale comprehensive renovations and in 1987, he founded VGC NYC.

In the years after its founding and still to this day, VGC remains a boutique-sized firm by design, affording Eddie the ability to personally embrace the intricacies, details and standards of every project VGC undertakes. He maintains an unrelenting focus to detail and quality, and a personal touch that has endeared him to countless architects, designers and clients over the years.

Eddie has been a member of various co-op boards in New York City and actively participates in “Contractors for Kids”, a not-for-profit corporation providing assistance to families whose lives have been impacted through sickness, injury or death.

Super Storm Sandy devastated the east coast; the degree of tragedy was monumental. With the power partially returned to NYC, and determined to keep the renovation of 29 East 64th Street on schedule, VGC returned to work.

Edward, noticing the absence of the Resident manager of the building, inquired as to his wellbeing. “I was told he had a house on Staten Island a few blocks from the beach, that was overcome by flood damage and instinctively offered to help. We loaded our trucks with tools and a portable generator I borrowed from a friend.”

The VGC crew, some subcontractors, families, and friends, offered to take part in the relief efforts. Emptying the soaked contents from devastated homes, handing out food and water, and providing support for people who lost virtually everything, Volunteers came in droves, affirming together we can overcome anything.